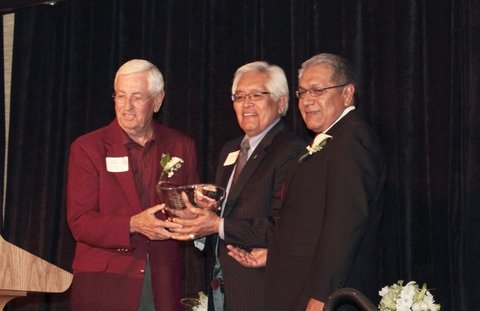 Laguna Development Corporation was honored for its long standing involvement and support of the Business School at New Mexico State University during a dinner and award presentation at the Las Cruces Convention Center on Friday April 12th.

During the presentation Dean Carruthers cited LDC’s commitment to the education of business students at NMSU through scholarships for Laguna students, direct involvement on advisory boards and committees as well as financial sponsorships that directly benefit the School of Business and the university. Ron Solimon and Jerry Smith, both NMSU graduates, accepted the award on behalf of LDC and expressed pride and gratitude for recognition of the decades-long relationship between the Pueblo of Laguna, the company and the university.

Chairman Solimon spoke about the relationship between the school and the company fostered by LDC Chairman Emeritus Floyd Correa who passed away last year. President Smith thanked all the employees at LDC for their roles in making LDC one of the most successful and highly respected Native American gaming companies in the country.